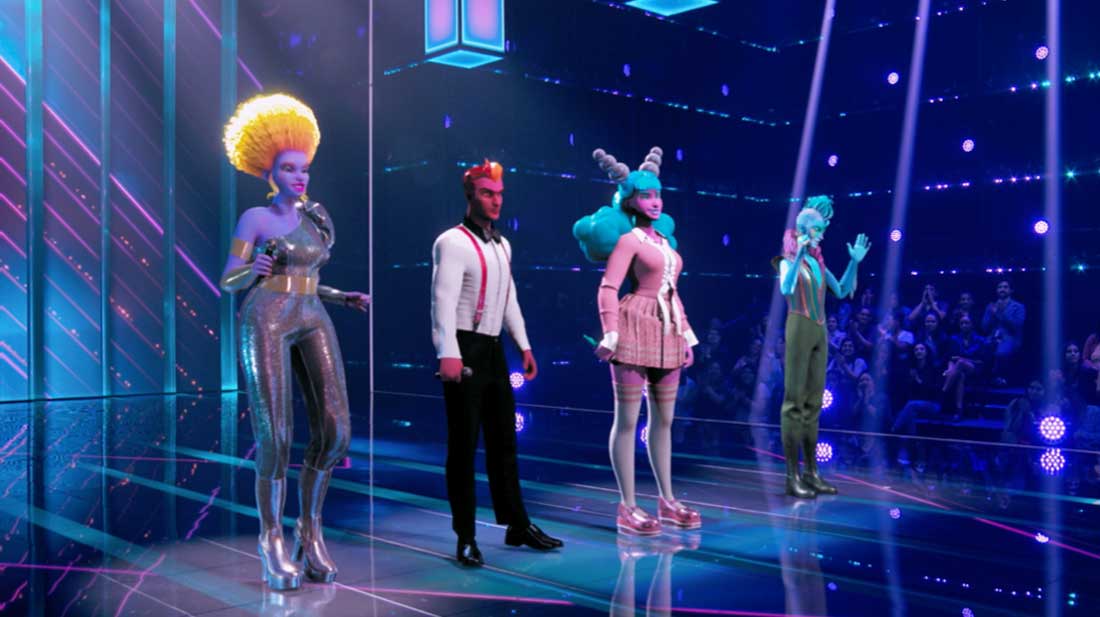 Silver Spoon, founded in 2016, is the studio behind some of the pandemic era’s most innovative augmented reality experiences. When stadium bleachers were empty, they filled them with the first ever real-time crowd simulations. They were also one of the studios behind the world’s first AR (augmented reality) virtual singing competition, Alter Ego.

Taking on challenges that haven’t been done before is what drives them. They’re the studio that says “yes” when a client comes to them with a wild idea. They figure out how to make it happen.

Silver Spoon started out primarily as a motion capture studio servicing other virtual effects studios, then began using Unreal Engine for real-time preview during motion capture. They quickly realized the power Unreal had for so much more. Now, they’re blazing trails in emerging kinds of virtual entertainment. “Our mission is to continually expand the boundaries of what can be made in real time,” says Laura Herzing, Executive Producer at Silver Spoon. “Helix Core helps us do that faster.”

Push the Envelope In Real-Time

Multiple People, Many Projects, and Tons of Files? No Problem

Perforce Helix Core was designed for the kinds of teams who have multiple people working with tons of large files. Teams exactly like Silver Spoon.

When Silver Spoon first started using Unreal Engine, they noticed when they would have more than a few people working on a project, it would become very hard to track and manage everyone’s files. “It took a lot of time and communication to make sure people weren’t stepping on each other’s toes with different files,” said Peter Collazo, Director of Motion Capture & Real-Time Technology at Silver Spoon. Collazo says they were manually iterating files to make sure they weren’t disrupting each other’s work, and they were dealing with a lot of files, so their process was just not efficient.

They started looking for solutions, and found Perforce because their sister company, V-Armed, was using it. They decided to give it a try. "We discovered it's a no brainer. We need Perforce," said Collazo.

With Helix Core, the team at Silver Spoon now has a single source of truth for all digital assets, like binaries and other IP. There’s no need to manually manage iterations of each file — all of that is done automatically with Helix Core. They can have multiple people working on the same project, and everyone can easily grab the latest version of a file. There’s no risk of team members wasting time working on the same task, since they can see when a file is checked out. Helix Core makes Silver Spoon’s processes much more efficient.

Now, a team member can also get updates on every file at a glance. They can see who last made revisions and when, and they can quickly scroll through the changes to see what has been updated. No more guessing what’s different between version A and version B.

Creative studios know that some of the best ideas come at the last minute, when a project is already set up and underway. And to deliver on them means needing to pivot quickly. For studios like Silver Spoon, this means a lot of changes may need to be made in real-time, and that requires quick work and communication by everyone involved.

“Helix Core has been great for us in terms of when projects reach those pinnacle bottlenecks when everyone is piling on to try to figure out a last-minute ask,” said Mark McCallum, Virtual Production Supervisor at Silver Spoon.

Team members can communicate about an asset while working on it, right within Helix Core, ensuring no one misses a comment or update. And changes can be committed quickly so a file can be handed off to the next person in line. The (new) final project gets out the door quickly, in time to wow their clients and audiences.

Real-time work has become Silver Spoon’s bread and butter. On their live productions, like Alter Ego, they use a lot of render nodes and multiple computers. They might have anywhere from two to eight cameras for a production. They have Helix Core loaded onto each machine, and they’ve even developed custom tools that use the Perforce command line to automatically sync across all nodes. Having Helix Core means they don’t have to manually go into each machine and pull down files they need, which would slow them down considerably. It also allows them to react quickly to fix any problems or add creative within minutes or hours, depending on the situation. Without Helix Core, the same change could take half a day or longer.

Knowing Helix Core has every iteration backed up, and they can quickly make changes and revert them if they don’t work out, Silver Spoon is able to take on more risk than they could before. They have been able to push the envelope on real-time virtual production and say yes to bigger projects with clients because they aren’t limited by their technology.

With Helix Core, Unreal Engine, and their virtual production expertise, Silver Spoon can be the studio clients turn to for groundbreaking experiences. Considering that augmented and extended reality are starting to become mainstream, and that major tech companies are making big investments in the metaverse, studios like Silver Spoon are better prepared for the future of entertainment.

Push The Limit on Real-Time Innovation