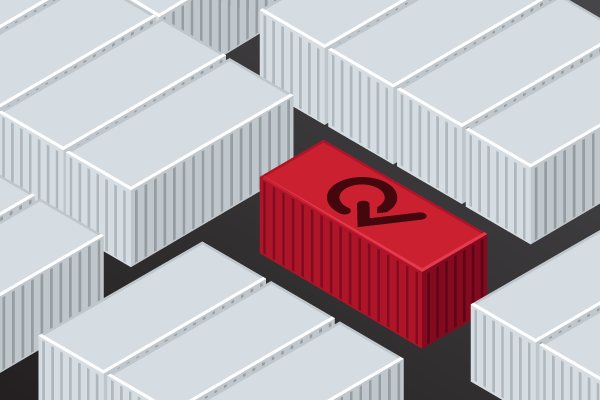 Docker Tutorial: How to Create and Run Helix QAC as a Container

In this Docker tutorial, you will learn how to create and run Helix QAC as a containerized image.

The basic definition of Docker is an open-source and popular operating-system-level virtualization (commonly known as “containerization”) technology that is lightweight, portable, and primarily runs on Linux and Windows. Docker makes it easier to create, deploy, and run applications by using containers.

Fundamentally, a container is just a running process with some added encapsulation features applied to it.  With containers, developers (and DevOps administrators) can package an application with everything needed to run the application — including code, run-time, libraries, configured environment variables, and configuration files — and ship it all out as one package.

It is also worth mentioning that Docker can start up instantly and has built-in mechanisms for versioning and component reusable. These docker containers can be shared via the public Docker Hub or private repository — making them accessible and easy to use.

Here are some of the most notable benefits of Docker:

However, there are some limitations to Docker, and even though they have a low to zero impact on the setup of the static analyzer for Docker, it is nevertheless important for you to be aware of them.

To help with the setup of the static analysis tool as Docker and some work around these limitations, I will break down the setup into three easy parts.

A great starting point to get started would be from this site https://docs.docker.com/get-started/overview, which has plenty of details about setting up the Docker Engine and then how you validate the environment of its proper setting.

The goal for the next part of our docker container tutorial is to set a Docker Container to run as Helix Static Code Analysis Tools.  There are a few ways to configure the docker image to support different coding compliance modules such as MISRA, AUTOSAR, CWE, CERT, and static code scanning tool, more.

However, in this tutorial, I will only demonstrate how to build a specific Docker image with a few important components that we will be using in the Docker Container as a Helix QAC Tool (DaaQT).

In addition, I will discuss how to handle the persistency of the project data configuration when running the analysis scanning tool, so that you can store the Helix QAC project specification and the project supporting configuration files outside of the docker container, such as the prqa project folder and pqraproject.xml.<name> supported files.

Any changes made to these files will persist even after the docker container execution is completed and shut down. Any build script changes from build to build on the docker executions will be output to the external project folder mapped on the host machine and will stay persistent.

First, let’s identify some of the components that I have chosen to be used in building the docker image with its basic descriptions.

Next, download the Helix QAC parser tools and the coding compliance modules that you have available (or have purchased) and place those installation files into a known folder location on your host machine.

Next, create a docker build script file. For the example, I named my file “qacDockerfile” with no file extension (the default name is “dockerfile”). This file will be used by the docker engine to create your docker image.  Basically, it has a list of commands to send to the docker engine to execute them from a top-down order.

Then place these files (including the qacDockerfile) in the DaaQT folder. These are the only files you will need to generate this docker image.  Also, notice I had put them under the “vDockerBuilds/DaaQT” folder.

Here is the content of the “qacDockerfile” script file with some explanation. 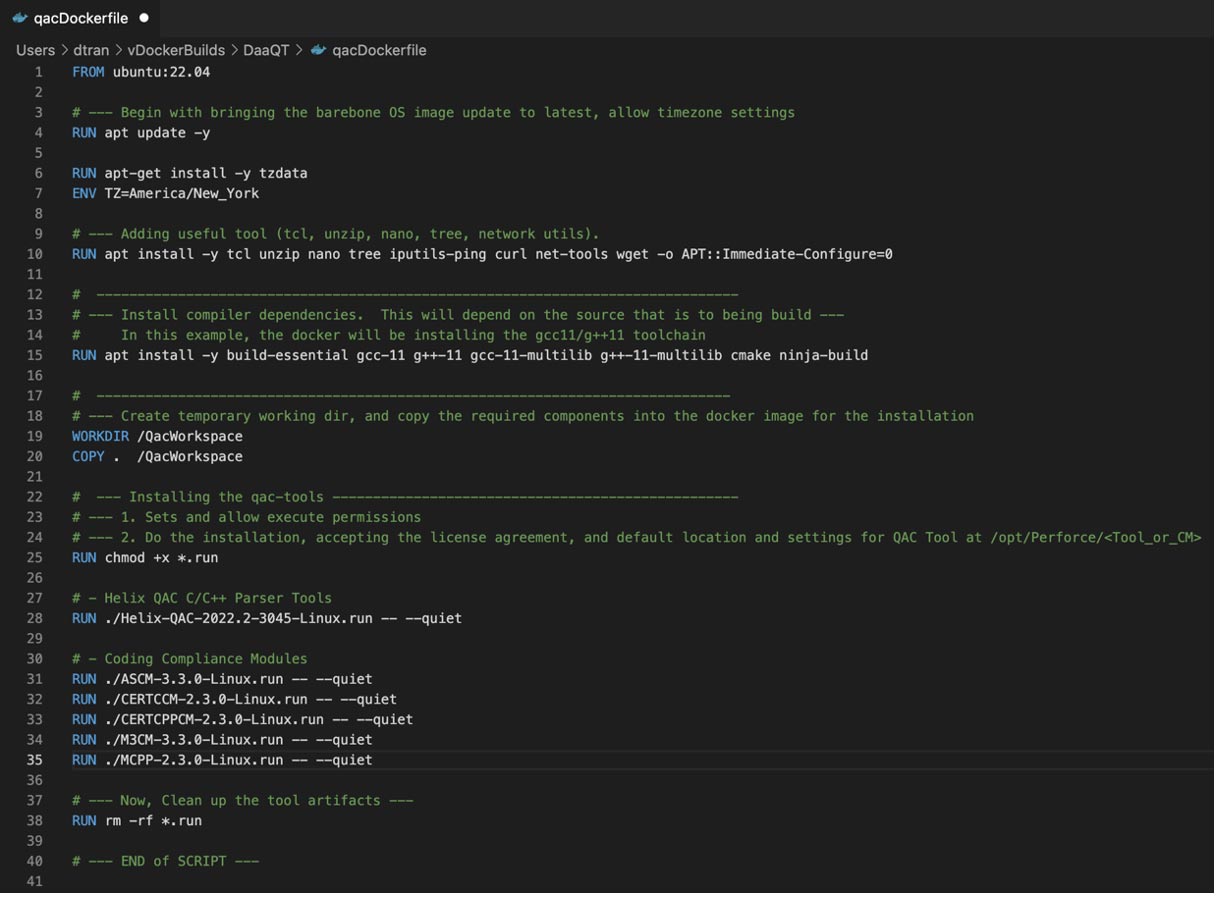 Next, to build the docker image, we would need to run this command:

Once the build image process has been completed, you can see the last two-line messages which indicate writing to a file and tagging the image. To verify the build was a success, run the following command to display the list of all available docker images.

PART III: Running the DaaQT on the Local Project

Before we can use this docker containerized image (Docker as a QAC Tool – DaaQT) to perform any static code analysis run on the local desktop project, we will need to make sure we have access to the license server for permission to use the tool.

In my example, I will be using an external remote Reprise License Management Server to request a license to use.

First, we need to create a local project run script that knows where and how to access the remote Reprise License Server. This project run script must also know where the Helix QAC Dashboard server is located to upload the project diagnostic messages result after the analysis runs are completed.

Let’s review the script file called “runQACSCA.sh” and its contents. I will provide some explanation of what it does step-by-step. 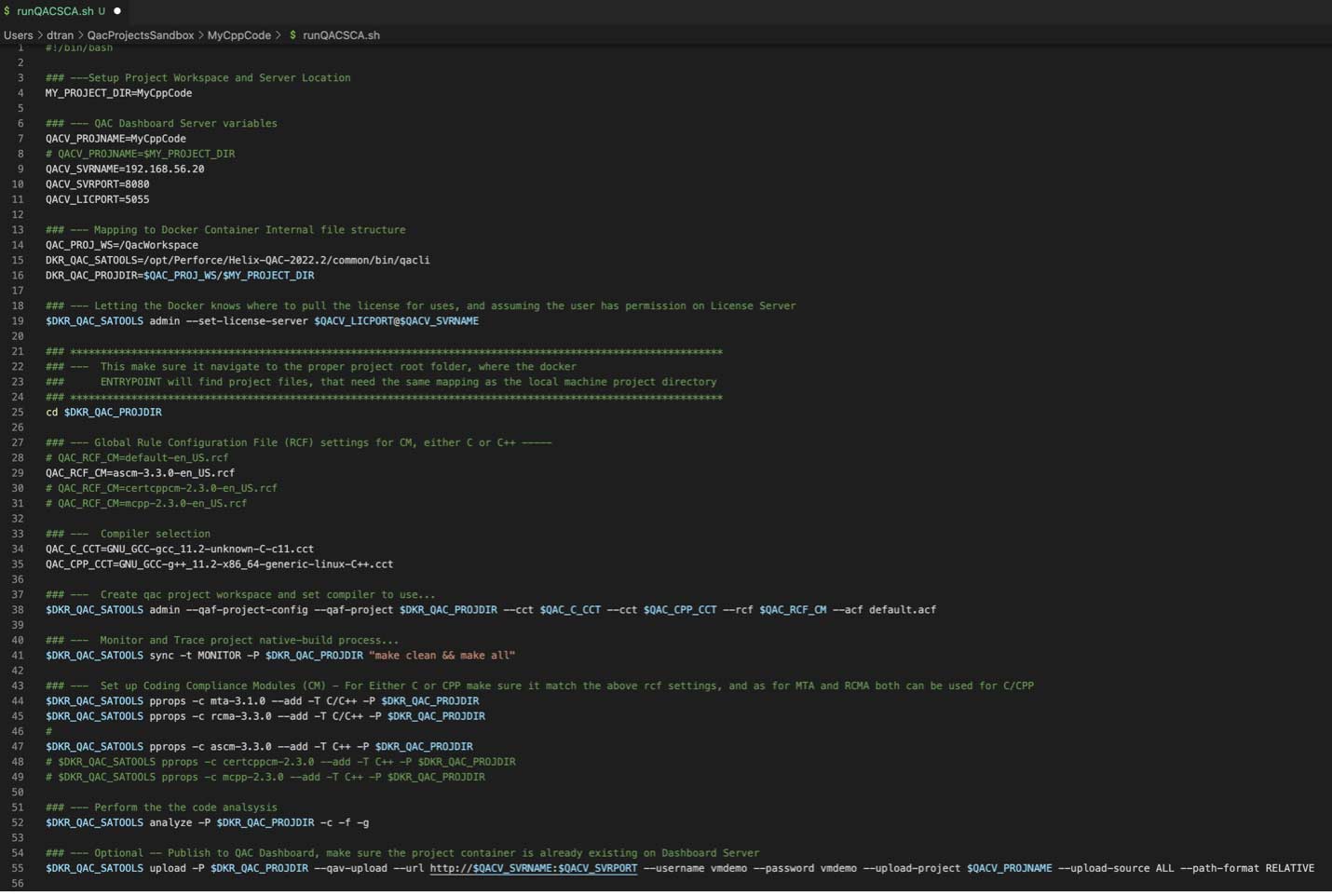 Run the following docker commands which will map the local project volume to the docker project volume so that the analysis data files will be persisted. Pay close attention to the ENTRYPOINT argument, where the script file “runQACSCA.sh” is to be executed from the project root folder.

Here is the docker command with some explanation:

You can also use a shell script to run it, instead of having to remember to type out all those parameters on the command lines. In addition to not having to remember all those details, this also allows us to make minimal changes to the script file to adapt for other similar projects.

For my example, I created a shell script called “runDaaQT.sh”.

Optionally, you can also run this docker container for the CMakeNinja project, which has a similar command line as a previously demonstrated project. This project uses the CMake and Ninja command-line build systems. 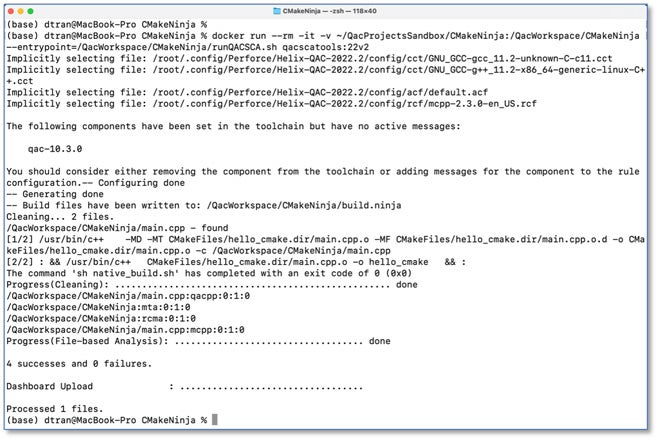 Dzuy Tran has over 30 years of experience in designing and development of Hardware and Software Embedded Systems, RTOS, Mobile Applications and Enterprise Systems. He helps customers when they have technical questions, assists with Proof of Concepts, and conducts demos of the Static Code Analysis tools and help guided customers on DevOps implementation processes and Continuous Integration deployment. Dzuy holds a master’s degree in Computer Science and Computer Engineering from National Technological University.