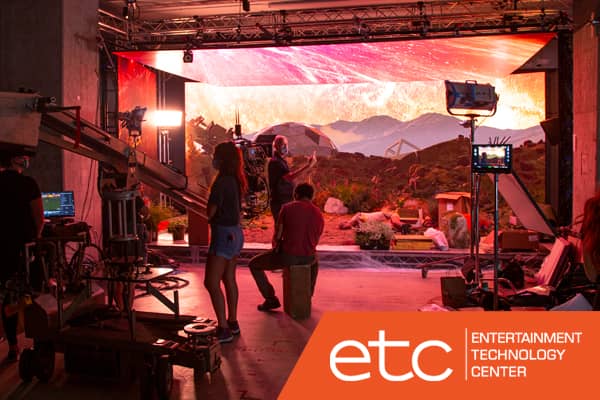 What does a virtual production setup need? When the world went remote, studios needed to limit the number of people on set. To support the shift to remote work, teams needed to learn and implement new software tools. Game technology — like Unreal Engine and Unity — were powerful enough to meet the demands for this rapidly changing industry.

Throughout the process, ETC was able to identify software solutions and best practices to create a standard workflow for industry-wide adoption.

At Perforce U College of Virtual Production, learn from ICVR experts on what you need to build a virtual studio — all for free.

For Ripple Effect, much of the work needed to be done remotely to protect the safety of the crew. Safetyvis was now part of preproduction. ICVR and Halon Entertainment were in charge of the Virtual Art Department (VAD) to oversee previs and techvis, along with live scene updates that would be pushed to other studios. These studios would determine asset placements and track changes as scenes evolved. While ICVR helped out on set, Halon Entertainment was 100% remote. Both studios worked in Unreal Engine (UE).

Previs is not just for storyboarding. It is where studios can map out scenes, shot lists, and more using game engines. Teams develop assets up until the day of the shoot. Artists, designers, and engineers work with just five lines of text to transform them into a virtual world. Although many previs processes start with a PowerPoint or simple email, ICVR and Halon Entertainment were able build the scenes.

Because ICVR has been working on virtual production for years, they have built up a huge library of assets. Being able to pick a character or a background from their existing work helped them prototype quickly. This library is essential for them to get more done on a tight deadline, because there are not enough resources to build everything from scratch.

Quick access to assets allows these teams to speed up the pipeline in previs (and beyond). And stakeholders can actually see it, instead of just needing to believe it would come together, or that it could be fixed in post.

Throughout the process of working on an asset, ICVR and Halon Entertainment needed to pass assets back and forth. These were often created using a variety of tools including Maya, Blender, and more. Traditionally in filmmaking these assets could have been passed using physical hard drives, Google Drive, Dropbox, etc. But with virtual production, you need software that can handle the massive size of UE assets (1TB+) and deliver them securely between locations.

For Ripple Effect, teams used Perforce Helix Core as the backbone for their data management solution. Helix Core is the version control solution trusted by 19 of the top 20 game dev companies. The tight integrations with game engines, like Unreal, and artist and designer tools, made it easy for everyone to build their way. Plus, the performance capabilities of Helix Core allowed ICVR and Halon to manage massive files and numerous iterations. Being able to get files and feedback fast were essential to meeting the demands of changes on set after previs.

“Perforce Helix Core has been a foundational tool. It helps create a single source for all of our film's digital assets. We can version our critical IP and digital files within an infrastructure that supports and integrates with leading tools like Unreal Engine, 5th Kind, ftrack, and more.”.”— Erik Weaver, Director, Adaptive Production & Special Projects at ETC

To keep things organized, ICVR set up two separate depots. One for shared assets, and the other for strictly ICVR created assets. Teams were able to collaborate and still easily pull everything together in Unreal. Both companies also used Perforce Streams, the branching and merging mechanism in Helix Core.

This feature streamlined how changes were merged. Contributors didn’t need to guess where files needed to go. Perforce Streams helped guide them. And if someone else was working on a file, one studio could exclusively check it out to avoid duplicating efforts. Everyone was on the same page, even across studios. Plus, they always knew they had the most up-to-date version.

What You Need For Your Virtual Production Setup

From pre-postproduction, Perforce Helix Core can help propel your innovations. Because when it comes to data management, Helix Core helps secure all your digital assets, while enhancing global collaboration.

You can optimize your virtual production setup to build bigger and better worlds, no matter how many studios are working together. Helix Core gives your teams security and reliability without sacrificing on performance.

Because when it comes to virtual production, there is no limit to what a team can build with the right skills, resources, and technology.