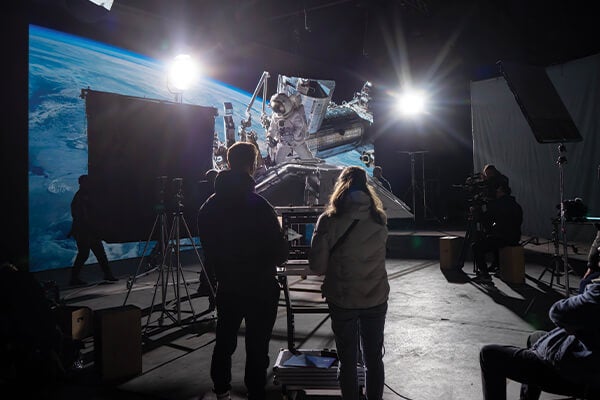 This technology is revolutionizing the film and media landscape. Read on for an overview of using Unreal Engine for virtual production.

What is Virtual Production in Unreal Engine?

Before COVID-19, movie studios would save most computer editing for post-production. But now, game engines like Unreal are revolutionizing previsualization, virtual set creation, and more. Teams create versions of scenes before anyone is on set. They can then be reviewed and collaborated on in real-time.

Using Unreal for virtual production encourages a more iterative style of filmmaking, allowing artists to innovate more. Studios can work together to map out visual details before and while actors are on set. For actors, they can even see what the finished product looks like. This removes some of the uncertainly that plagued traditional filmmaking.

Learn how leading studios manage the large files and numerous iterations associated with Unreal Engine. Get free training (and tools).

It’s also free for many game developers, with a 5% royalty only being required if your title earns over $1 million USD.

Learn more about Unreal Engine licensing and download it here >>

With Unreal, virtual production teams can create virtual worlds and characters to be displayed on large LED screens. Then, the cameras on set are synced with virtual cameras in Unreal, so that the virtual scene moves as the cameras do.

Creating art assets for virtual production with Unreal Engine helps everyone on your team understand the final vision from the start. That's because using a real-time game engine does more than other 3D animation software. It helps directors, set designers, actors, and others understand the real-world physics of a scene. Teams can create high-quality visuals. And with the right pipeline, they can keep up with changes, avoiding the bottlenecks of long reviews and the risk of a reshoot. Now everyone can make quick decisions and adjust digital assets in real time.

Let’s say your team is working on creating a background that will be displayed on an LED wall. Before anyone steps on set, the virtual art team can build out the trees, mountains, and other components. These assets can be used throughout the film and iterated on to meet specifications. VFX studios don't need to come in after the fact to match graphics with camera footage.

These assets can even be used for other productions. If managed and stored correctly, studios can adapt what they have already created to deliver fast. This creates higher quality and consistency across production.

One of the most important technologies to make Unreal virtual production a reality is a high-performing system that can manage and store the large files and massive amount of iterations. This technology needs to also connect people in real-time so teams can take advantage of Unreal Engine benefits.

For example, a cinematographer needs to see the virtual set in order to match the lighting on screen. Or you have a character with different outfits and may want to make one change to impact all other colors and styles they would wear throughout the scene. But how can you know where this file is and what changes have been made? What if a similar change needs to be made across multiple digital assets? How do you know that you haven’t missed one?

Version control supports how you need to work. It's the backbone for digital asset management in virtual production. The right version control system can connect team members, delivering files and feedback quickly. It can centralize digital assets, ensuring teams can always find what they need. No more searching through Google drives and DropBox. When you combine version control with a real-time engine, you can build something unreal.

How Does Haz Film Manage Assets?

"For a small studio that has multiple projects at various stages of production happening simultaneously in Unreal Engine, Perforce is a huge weight off my shoulders.” — HaZ Dulull, Director/Producer HaZFilm

They expand on Unreal’s ability to build entire 3D environments and reshape virtual production workflows. The goal is to help achieve photorealism by allowing greater file sizes — and the use of 4K, 8K, and 12K textures.

By providing tools and content libraries within Unreal’s interface, artists can create more detailed visuals. They can react to scene and light changes quickly. For example, they could change the sun angle depending on the time of day or adjust sets to react to a flashlight being turned on. Being able to adjust the light in the editor saves time and creates a hyper-realistic environment.

How to Use Unreal for Virtual Production

Virtual production is the new frontier of filmmaking. And other industries are taking notice. Leveraging game engine tech opens up a world of possibilities.

To get the most out of Unreal, you need to use the right tools to back it up. Version control stores all of your digital assets and manages their iterations over time. Using version control can also help deliver really large files to your remote team members wherever they are located.

Perforce Helix Core can help you get the most out of virtual production + Unreal. 19 of the top 20 game dev studios trust Helix Core to streamline their builds and manage all their assets, not just code.

Get best practices in our Version Control for Virtual Production Field Guide.

Why Helix Core For Virtual Production with Unreal Engine

Helix Core delivers lightning-fast performance for studios. Unlike other version control systems, it can manage all the large digital assets that are involved in virtual production. Using Helix Core with Unreal + virtual production gives your team a single source of truth for your entire project.

Binary files, audio files, video files, code, and more can all be managed inside a Helix Core depot. Then assets can be pulled into your Unreal game engine. See how Perforce Helix Core helped create The Mandalorian.

Perforce Federated Architecture enables teams to share large files around the globe, fast. It offers superior performance whether your server is on-premises or the cloud. You can make real-time edits without the WAN wait.

And Helix Core integrates with more than just Unreal. It works with the most popular game engines, including:

And it can easily be deployed in the cloud and offers integrations with the tools digital creators are already using — 3ds Max, Maya, and more.

See for yourself why so many studios choose Helix Core for Unreal virtual production. Plus, you can start free for up to 5 users and 20 workspaces.

There are a lot of art files involved in using Unreal for virtual production. Art teams need a good way to easily store, find, review, and keep track of art assets.

That’s where Helix DAM comes in. It is built on top of Perforce Helix Core, meaning it handles massive game engine files with ease. It adds an intuitive visual layer to Helix Core that makes it simpler for artists and creative teams to use. With its smart tagging features, it makes finding and using art assets a breeze. It lets your team see assets at a glance and always find the right one for use on set.