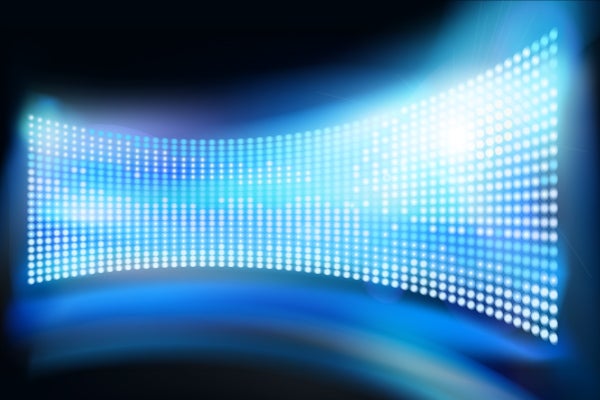 What Is a Virtual Set?

A virtual set is an environment in a studio that allows teams to manipulate the digital background in real time. This allows filmmakers and broadcasters to alter things like the location, weather, and time of day using software. Teams can place on-set actors anywhere!

What’s the Difference Between a Set and Virtual Set?

The main difference between a virtual set and a traditional set it is the ability to manipulate the background. Teams can use a variety of methods — green screen, LED walls — to transform the scenery.  Because virtual sets are created and displayed digitally, teams can film at multiple locations in one day, on a single stage.

There are a lot of benefits when it comes to using a virtual set. You can:

Disney’s The Mandalorian uses virtual sets with large LED walls/screens to transport viewers into a galaxy far, far away. The backgrounds are created in game engines prior to filming and then displayed on screens behind props and actors.

Unlike green screens, LED walls can offer more accurate lighting and reflections while also allowing the entire cast and crew to see the environment around them. Although they cost more up front, teams can spend less time in post manipulating scenes.

Video game technology — like Unreal Engine and Unity — allows artists to create photorealistic 3D backgrounds (like the ones used in The Mandalorian). Combined with motion tracking, the game engine can update the background images to perfectly match the movements of the camera. From the camera’s perspective, it looks as if they are actually filming inside a real 3D space.

Unlike being on a traditional set, teams can adjust lighting and reflections inside the game engine. These techniques are unavailable with green screens. For actors, LED walls allow them to physically see the final images, which will end up on television and movie screens.

In addition to LED walls, green screens can be used to create a virtual set with virtual production techniques. In this case, rather than projecting images onto LED walls in the background, the image from the camera is processed in real time by the game engine. It removes the green and replaces it with the virtual set. Then it is broadcasted back to the camera operator, director, and producers while filming.

While there are certain disadvantages — such as not providing realistic reflections and lighting from the background and not allowing the actors to see the environment. But, there are certain areas where green screen virtual sets shine.

Why Studios Use Green Screens for Virtual Sets

Because green screen virtual sets don’t rely on the resolution of the LED panels, the camera is able to focus clearly on objects. It can record in the virtual “distance” while filming without concerns about moiré or aliasing that you would have on an LED screen. Green screen virtual sets also have a lower infrastructure cost. Building a green screen stage is much cheaper and can be more easily changed than an LED stage.

Whether you are using green screen or an LED wall, real time software is key to allow creatives to view the environment while filming, instead of waiting until post-production adds in the backgrounds. When using real time software, version control ensures you are always using the correct versions of the virtual sets while filming.

Learn How to Build Your Virtual Set

At Perforce U College of Virtual Production, you can learn how to use the software top studios are using on set.

Virtual sets work by bringing together digital assets created beforehand with live camera tracking. Teams can use a variety of software and hardware components, depending on the nature of the final project. For teams looking to create and display images, game engines and asset tracking tools are key.

A commonly used game engine for virtual sets is Epic's Unreal Engine. It was used for Ford v Ferrari, Westworld, The Mandalorian, and more to create next-level images. Virtual sets can be created in Unreal Engine during previs and adjusted in real time over the course of production, allowing teams to tweak scenes and virtual production images, even while on set.

The 3D assets can also be reused in post-production for full CG scenes, or in marketing images to promote the final film. Being able to share virtual set files helps unite cross-functional teams and teams spread around the world.

LEARN HOW TO USE UNREAL ENGINE

Unity has been used by game development studios for years. Recently, they are breaking into the virtual production space with the purchase of Weta Digital. This game engine offers similar capabilities as Unreal Engine and is behind CG animation for the Jungle Book and Blade Runner 2045.

LEARN HOW TO USE UNITY

Both Unreal and Unity game engines allow teams to create new worlds which can be dropped into a virtual set. But…

The solution: version control. It can solve collaboration challenges, providing a foundation for digital asset management. That way creatives can focus on innovation, not their tools.

The right software can create a single source of truth for digital assets. This allows team members to work together without stepping on each other’s toes or losing work, while ensuring each artist has the most up-to-date work from collaborators when working.

Small studios may use Google Drive or even a shared hard drive. But these options can be slow, unsecure, and don’t provide the ability to restore previous versions or avoid accidentally deleting or overwriting files.

Why Helix Core Is the Best Virtual Set Software

For top virtual production studios, the solution is Perforce Helix Core. It is the foundation for digital asset management. When creating a virtual set, teams do not need to worry about locating the correct asset. Helix Core seamlessly tracks and manages every change to every file.

The tight integration with Helix Core and game engines have made it the standard for game development (95% of AAA studios use it). And most recently, Perforce has become part of the Trusted Partner Network (TPN), making it the choice for studios who need to protect clients’ intellectual property. With Helix Core, teams can work quickly. The high-performant system can make remote teams feel like they are all working together in the same room.

When Entertainment Technology Center (ETC) started working on their short film Ripple Effect, they wanted to build a virtual set and leverage an LED wall. They brought together ICVR, Halon Entertainment, and other studios to create the visuals in Unreal Engine.

To unite contributors, they versioned everything in Helix Core. From the start of the project, they were able to iterate quickly and constantly improve their work. Storing all the content in Helix Core allowed them to leverage a library of assets for different scenes.

Creatives and producers didn’t need to guess where assets were located. They were able to quickly find and update their 3D files from anywhere. Being able to efficiently use time on set kept overall costs down. Everyone was on the same page throughout previs, production, and even into post.

As you embark on this new frontier of filmmaking, you need the best virtual set software to support your dreams. If you need to manage:

Then you need Helix Core. It gives your team a single source of truth through the entire production process.

Binary files, audio files, video files, code, and more can all be stored and securely versioned inside a Helix Core depot. Your teams get lightning-fast performance thanks to Perforce Federated Architecture. You can easily deploy Helix Core in the cloud and it offers integrations with the tools digital creators are already using — Unreal, Unity, 3ds Max, Maya, and more.

See for yourself why so many virtual production studios choose Helix Core. Get started for free (up to 5 users and 20 workspaces). Jase is passionate about all things VFX. Being involved in the film and television industry for over a decade, he has worked on projects that have been viewed by people around the world. With Perforce, Jase is helping transform workflows, providing VFX, animation, virtual production, and game developers with the tools to improve productivity and quality-of-life in future projects.