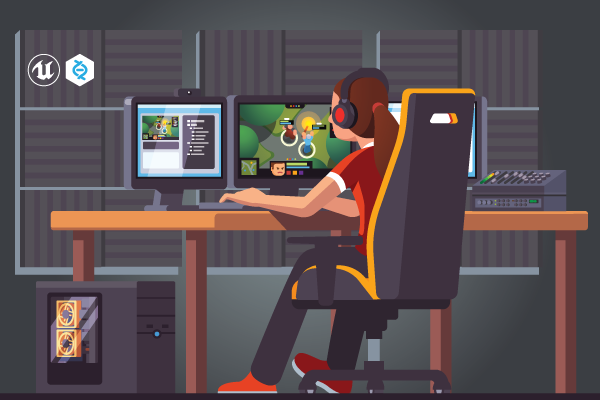 How to Use Unreal Engine 4 with Perforce Helix Core

Unreal Engine 4 is a popular game engine and industry-leading studios choose to use it with Perforce Helix Core version control.

Here, you'll learn how to use Unreal Engine 4 (and why the top 19/20 studios choose Helix Core to version everything).

➡️ Get Started with Helix Core for Free

Unreal Engine 4 (UE4) is a game engine developed by Epic Games and released in 2014. Unreal Engine has been powering games since 1998. Developers, designers, and artists all love to use UE4. (UE4 is not the latest version of Epic’s game engine — Unreal released UE5 in April 2022.)

Is Unreal Engine 4 Good For Beginners?

Unreal Engine 4 is good for beginners and advanced users.

What Can You Do in Unreal Engine 4?

You can create a game — or other visual assets.

How to Use Unreal Engine 4

Here's a quick overview of how to use Unreal Engine 4:

Looking to get the best tool free? Now you can. Try Helix Core from Perforce free for up to 5 users.

UE4 is popular among game development and AR/VR teams. That’s because UE4 is a great engine for creating immersive experiences. But UE4 needs source control.

So, it should come as no surprise that many teams using Unreal also use Perforce version control — Helix Core. The two tools are tightly integrated, which helps your team work together more efficiently on projects. This integration is through the Unreal Editor.

Why Use Helix Core For UE4 Version Control

Gain a Single Source of Truth

There are large binary files, many files, many contributors, and many changes involved in building a game today. And it’s important to maintain a single source of truth.

The Unreal integration is a key part of this.

If you are a developer, you know how tough merging code across a team can be. And the large number of branches associated with the game development process can be overwhelming.

“Dealing with so many branches can be overwhelming,” says Nick Penwarden, UE4 Development Manager, Epic Games. “We use the streams feature in Helix Core to facilitate and help manage the complexity of our branching setup.”

➡️ get the eBook

For Unreal teams, using Streams is key for controlling updates.

Let’s say that UE4 has an update. You need to bring that update into your project — without breaking anything. Streams helps you do it.

In a recent webinar, Sumo Digital shared best practices for game development using Streams. One of these practices is having three streams — main development, integration, and engine.

Tutorial: How to Use Unreal Engine 4 with Version Control From Perforce

Watch the tutorial video to learn how to use Unreal Engine 4 with Perforce Helix Core — or keep reading for a recap.

First, you’ll need to install Unreal Engine. The latest version, UE5, is available as of April 2022. Stay tuned for information on how to use UE5 with Perforce Helix Core. If you already have UE4 installed, skip to the next step.

If you’re not using Helix Core yet, get started for free for up to 5 users.

The video below walks through this process.

Unreal also provides guidance for getting started with Helix Core in Unreal.

Before adding files to the server, you’ll need to set up the P4 Typemap, so Helix Core knows how to handle Unreal files.

This is an important step. For instance, if you want to edit a binary, it will be exclusively locked if you have the typemap setup.

4. Set Up the Environment

Next, you'll need to set a couple of environment variables, so UE can find your workspace.

Open a command window and type:

Now it’s time to return to UE4 (or launch it if it isn’t already open).

Once you open Unreal:

Watch the video above for an in-depth tutorial of how to download Helix Core and get started with the Unreal Editor.

6. Use the Unreal Editor (If You’re a Designer or Technical Artist)

Asset files (with the extensions .uasset and .umap) are binary files modified in the Unreal Editor. They cannot be opened as text or merged in a text-based merge tool.

When you want to work on an asset, you just click on it in a UE content browser. You’ll see a “check out” choice. The file is locked automatically when you make that choice.

When you’re done editing files you have locked, check in or submit those files. This uploads the changes to the server and releases the lock on the files.

You can even see the history of changes to the files — and visually compare one version to another — without leaving UE.

7. Use Microsoft Visual Studio (If You’re a Coder)

Here’s that single source of truth again. All the changes that anyone on the team makes, whether to artwork assets, blueprints, code, or other work items, are seamlessly managed in Helix Core.

Get started on Unreal engine game development with Helix Core today. You can get started for free for up to 5 users and 20 workspaces.