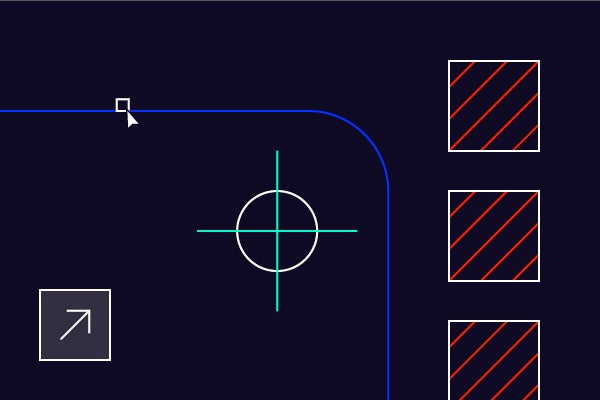 Engineers across industries are using AutoCAD + game engines, like Unreal. Why? AutoCAD can be used to create comprehensive technical designs which are required for manufacturing and testing. For product visualization, game engines shine. When combined, they can maximize innovation.

Learn more about this powerful duo and discover why teams are adding the Unreal game engine to their use of AutoCAD.

AutoCAD is a popular computer-aided design (CAD) software created by Autodesk that is used to create 2d and 3d models and designs. Engineers, manufacturers, architects, and many other professionals across many industries use AutoCAD to build and test objects and structures with incredible technical accuracy.

What is AutoCAD Used for?

AutoCAD is used to create accurate simulations of products before they are produced in real life. Teams can design elements — for example a car engine or architectural plans — that are then handed off to manufacture  for production.

Limitations of using AutoCAD for Visualization

AutoCAD has a visualization/animation panel that allows users to create virtual walkthroughs of a design. It’s great for giving an accurate presentation of the layout or structure of the product.

And while 3D models made with it can be very aesthetically accurate, modern game engines — like Unreal Engine – just do this better. AutoCAD simply doesn’t offer the hyper-realism of Unreal and other game engines.

To be able to fully and realistically visualize an end product, many industries are adding game engines to their development pipeline.

Visualize and Test in Real Time

With game engines, engineers can make changes and quickly see how they look. These tools are powerful enough to produce visualizations in minutes. The benefit is that teams can iterate faster, allowing them to innovate more. Instead of needing to interpret data on a screen, they can see the impacts of testing. Game engines allow you to manipulate real-world physics and give you the ability to pull back the curtains to optimize internal components.

AutoCAD software is from the engineering world. The technical diagrams are usually created then handed off. But what if you want to collaborate throughout the process? This is where game engines can make a big contribution.

Daimler Protics — a subsidiary of the German automotive giant Daimler AG — use Unreal to create a virtual collaboration space. Engineers created a VR program for real-time, 3D visualization of projects. That means information doesn’t need to be lost in translation (i.e. via email, and other means of communication that don’t support 3D projects well). Daimler Protics worked with their CAD provider to have an extension plugin made so they could integrate their CAD into Unreal Engine.

And of course, game engines allow for highly realistic, free prototypes. Plus, these prototypes can be changed and rendered quickly, cutting down on overall development costs and speeding up time-to-market.

Game engines are unparalleled in their ability to create photo-realistic designs. To truly get a sense of what the product will look like in terms of textures, shadows, reflections, and more, you need a game engine. These marketing-friendly designs can then be handed off to other teams or to stakeholders, making it easier to align decision makers early on in development — saving teams a lot of hassle.

How Industries are Using Game Engines for Visualization

How are companies moving from AutoCAD to Unreal game engine? Learn more.

Companies like SkyReal design VR solutions for aerospace engineers, allowing them to collaborate virtually—a lot like how Daimler Protics does it. Iterating with a 3D model in a 3D world streamlines the decision-making process.

Other uses of game engines in the aerospace industry include creating virtual repair and maintenance programs. And private jet makers are using VR programs to allow buyers to customize their jet, making for an all-around better buying experience.

Game engines make it possible for automotive developers to visualize how the components of a vehicle will fit together. The more realistic the model, the better you can tell how easy it will be to access and fix a given part. This allows them to catch potential issues earlier in the design process.

On the consumer side, smart auto companies are finding ways to create virtual experiences of their vehicles—like Ferrari, who made an ultra-realistic, drivable copy of its new 296 GTB model for Fortnite.

Tools Needed to Get the Most Out of Game Engines

Convinced it’s time to take advantage of game engines? Besides the game engine itself, here’s what you need to get started.

What would it mean for your business if you could run tests in seconds instead of minutes? If you could spend more time developing and less time configuring your tools or searching for data in them?

Helix Core, industry-leading version control from Perforce, has the power engineers and developers need to add game engines to their production pipeline and start innovating.

Autodesk uses other version control systems. But if you want to use Unreal game engine, these systems will fall short. They simply cannot handle the large binary files created during the rendering process. And to accelerate development, you are going to want to iterate more, potentially leading to an explosion of digital assets.

So many industries are finding smart ways to make game engines work for them. What will your team do?

However you end up innovating with game engines, start with a strong foundation. Choose software that lets you accelerate pipelines, keep data secure, and improve your team’s performance and collaboration.