What Is a Git Wiki?

A Git wiki stores documents and their associated change history in a Git repo for Git development. This allows teams members to:

With all the options out there, which Git wiki is right for your team?

Helix TeamHub hosts source code — whether it’s Mercurial, Git, or SVN —  and offers support for SVN and Git wikis. Plus, it's free.

Get Your Free Git Wiki

When deciding on a Git wiki –– and a version control tool –– it important to think about how you want your project structured and how people will contribute.

Most Git-powered wikis are very similar. Intuitive editors and updated UIs make creating documentation easier than ever. Use the chart to compare features and key functionalities. 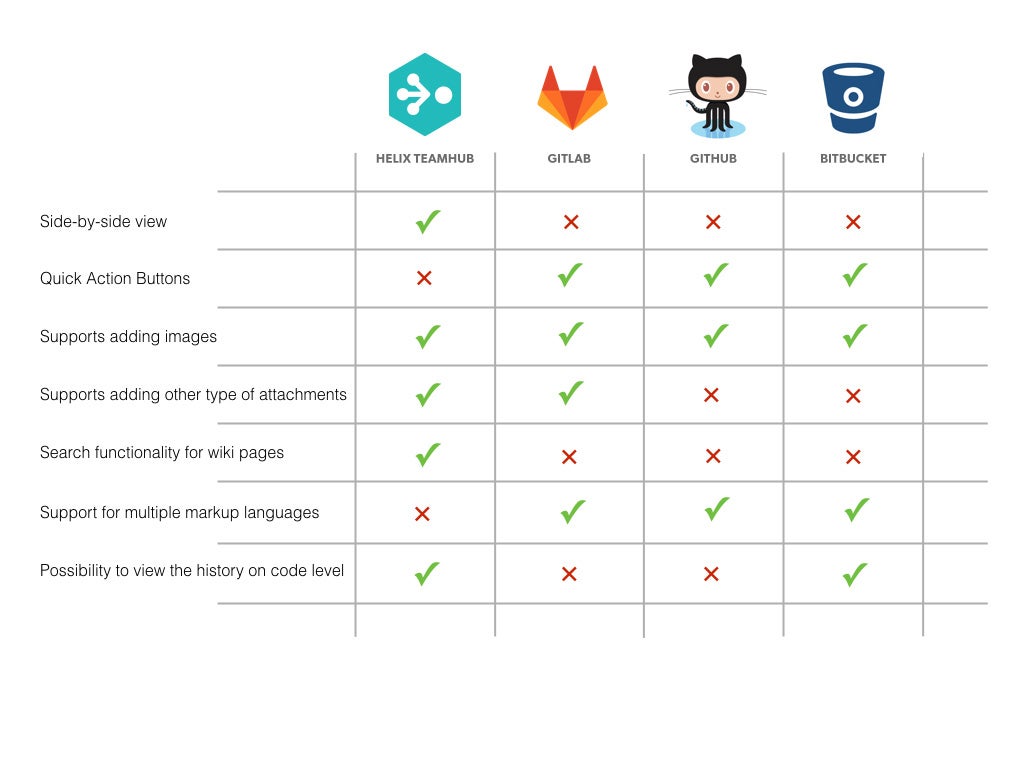 GitHub navigation has been described as more intuitive than the navigation in GitLab. The convenient sidebar lists all of the wiki pages you have created for your current project. There is also a customizable sidebar and footer, which remains the same on every wiki page.

One disadvantage with GitHub’s Git wiki is that you can only add images by adding an image link. Unlike other wiki editors, you cannot just upload a picture to the editor. You need to either upload files to another website and link, or clone, add, then commit attachments.

To use a BitBucket Git wiki, you need to enable the feature in the repository settings. Once enabled, this editor is similar to GitLab and GitHub.

One feature in BitBucket –– that will be discontinued in 2020 –– is wiki support for Mercurial. The wikis for both Git and Mercurial are still repository-bound. BitBucket supports Markdown, Creole, reStructuredText, and Textile.

If you want to attach files other than images to your BitBucket wiki you also need to either add links or download and commit attachments.

In Helix TeamHub, the wiki is based on the project. Your project can have many repos, but just one wiki for all of them. This makes creating documentation for large-scaled projects more efficient. Plus Helix TeamHub offers other distinctive features.

In Helix TeamHub's wiki editor, you can see versions side-by-side. This handy feature makes the editor easier to use, especially if you are not a Markdown expert.

Since other tools store the wiki content in a Git repo, attaching large binary files may not be a good idea. Helix TeamHub solves this by supporting WebDAV repositories.

Although you cannot manage the WebDAV repository from Helix TeamHub's wiki, you can link the file to the Git wiki page. Since WebDAV doesn't version documents, it is important to implement a naming convention.

Using Helix TeamHub, you can create a project-based wiki in a Mercurial repository. In addition, no matter what type of wiki you are using, there is a new “quick action” available. This can speed up the process of creating new wiki pages. Less time administering gives your team more time for developing.

Get a Git Wiki That Works For Your Team

All of the reviewed Git-powered wikis have a lot of similarities. But if you have big projects with lots of repos, or multiple VCS systems, Helix TeamHub can support every part of your project.

CHECK OUT OUR GIT TOOLS