Creating virtual worlds and humans requires a suite of software tools. But a final vision is rarely
the product of one studio. For larger projects, studios need to work together to unite their global team members and their digital assets.

Perforce [Helix Core] is key to what we do because our business revolves around digital content and data is our lifeblood.

Outside of the Virtual Production Box

Since the beginning, Dimension has been at the forefront of building new, immersive experiences, pioneering real-time content for VR games, sports broadcasts, location-based entertainment, fashion shows, and now film. In 2017, the team launched a state-of-the-art volumetric capture studio in partnership with Microsoft and Digital Catapult, launching its capability to capture human performance and create advanced digital humans for all platforms.

“Virtual production is the convergence of our worlds. This powerful combination gave us an early advantage, and now is transforming filmmaking, bringing new possibilities for creators.”  says Holland.

“We are continuously innovating and looking to the future. There are always new challenges and problems to solve for storytellers" says Jim Geduldick, Director of Virtual Production & SVP at Dimension North America.

Dimension has over 90 people working between the U.K. and the U.S., their projects are captivating audiences and transforming the industry.

“Our projects have spanned feature film, episodic, broadcast, mixed reality, and streaming for live events. Pioneering new techniques and bringing them to clients drives the industry, and its imagination, forward," said Geduldick. 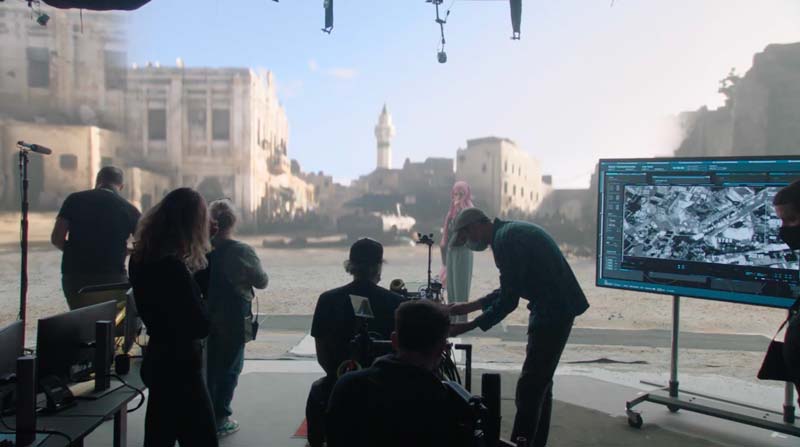 Holland explained, “As much as possible we aim to standardize our methods across our projects. This makes it much easier for our content and team to move between various projects smoothly. Small improvements and standardizations such as best practices, folder structure, and naming conventions for instance have huge benefits for our teams and projects. Workflows can be built upon and adapted for each project but having a known starting point is essential.

We ensure each member of our content team has the support and structure they need by providing learning materials, documentation, training, and assistance.

We also enable multiple projects to use the same set of tools. So as these are developed, all projects benefit instead of duplicating work. This is achieved using a separate depot containing our tools within Unreal Engine plugins. This folder can then be brought into other projects using the ‘import+’ feature of stream depots.” 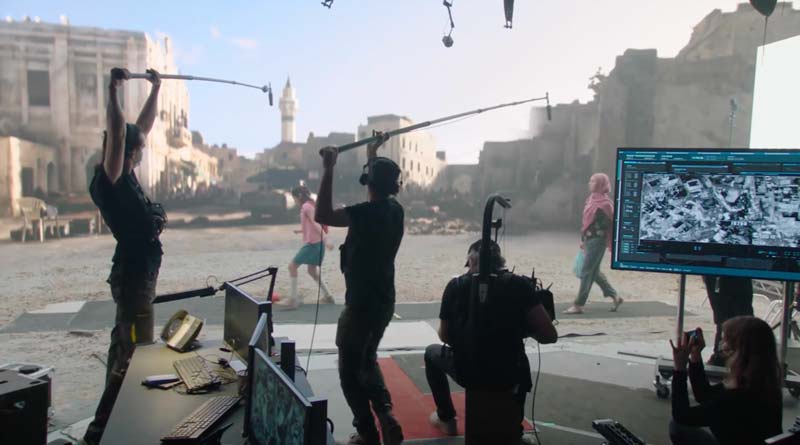 “Fireworks is a tense thriller which is simultaneously set in an MI6 ops room and a market in Tripoli. Using an LED wall and real-time scenes, we were able to create this effect in camera, along with all the lighting and reflections which would typically have to be added in postproduction. We were able to control every element of each shot and get a lot of footage in a short amount of time.

We could visualize everything ahead of time. The director and I explored previs and techvis using a virtual camera on an iPad, allowing him to make creative decisions, plan every shot, and create detailed storyboards. We knew what lens would be used and which parts of the stage would need to be in place. This informed production and allowed them to streamline the shooting order,” said Holland.

Recently, Dimension worked on the Coldplay x BTS “My Universe” music video. This project used volumetric capture and processing to create digital humans and holograms. “For Dimension, says Geduldick, “It involved lots of different vendors, in terms of visual effects.”

They were able to partner with studios around the globe, creating holograms and blending them together for a concept that was out of this world. The Dimension team captured Coldplay, plus instruments using in-camera VFX and oversaw processing of all band members to create consistency across the video.

As industries beyond media and entertainment look to leverage new technology to build their brand and market their product, Dimension is there to help. “New technologies present opportunities for companies to engage creatively with their audiences, crafting experiences with real purpose and impact to promote their identity and stand out from the crowd.” Holland said.

In a recent example, Dimension created an in-browser game, Afterworld: The Age of Tomorrow, that walked people through Balenciaga’s Fall 2021 collection.

“We gamified their fall fashion release,” Geduldick said. “We volumetrically captured the models wearing the collection on the Polymotion Stage truck in Paris, then created the digital humans, who were added to a game created in Unreal Engine. It was a highly marketed piece of material.”

For Dimension, Helix Core source control is the foundation for virtual production, digital human, and AR/VR/XR workflows. It enables team members across studios to work together to create a final asset.

“Although many typical online storage solutions are able to store, share, and sync files they are by no means an implementation of proper source control. Perforce Helix Core is a type of shelving solution which allows teams to know which files each user is working on. This helps to prevent conflicting files that cause users to lose work. Additionally, Perforce has an entire ecosystem of tools built to enable smart management of changes. We wouldn’t work on a project without it as it would be far too risky and volatile.” Holland said.

Helix Core helps studios like Dimension set up their workflows to meet production’s protocols. As part of the Trusted Partner Network, Helix Core meets the highest security standards, as set by the Motion Picture Association and Content Delivery & Security Association. For Dimension, Holland says, “We’re able to control the content that each vendor and user has access and permissions over. We do this by creating virtual streams which give those users a view into the depot that is catered to them.”

When working with multiple vendors, Dimension can use Perforce Streams to give outside resources access to a restricted group of files from their depot. They can even protect down to the individual file level for highly-sensitive projects. Everything is still versioned in one depot, ensuring assets remain protected.

“We’re able to control access to projects, streams, and files by using built-in access control features for third parties and Active Directory integration for their own staff. Having the ability to mix access control methods allows us to keep customer data/assets secure,” says Maciej Zaremba, IT Manager, Dimension.

Working on different projects, with Helix Core at the base, means teams can move quickly and collaborate effectively. Many of Dimension's projects involve multiple teams working around the world on the same content.

"Perforce Helix Core is vital for our collaboration as it provides a single source of truth, enables versioning, and gives us a history of all revisions. Beyond that Perforce also streamlines our workflows with a range of powerful tools. Within Helix Core we have the ability to branch with brains using streams and can utilize many useful actions such as reconcile and resolve. They are a fast and reliable way to streamline our workflows,” said Holland.

Perforce Streams helps team members collaborate without the headache. They can experiment by breaking off a portion of the project to work on. In Helix Core, people can see when new streams are created and who has a file checked out. Everyone knows who is working on what.

The nature of live environments such as events and film sets present technical challenges. Stability, speed, and security are vital for the success of these projects.

“Edge servers on location enable us to transfer data over local fiber networks giving us super fast speeds within a reliable and secure environment. Time on film sets is precious and every minute counts. Data is valuable and highly sensitive. Stream depots allow us to control and visualize our code line. Our content teams work within development streams and the mainline is protected for the stage team. Allowing simultaneous collaboration to take place without any risk of impacting the ongoing production. Changes can then be integrated when it is safe to do so. Using Unreal Engine’s Switchboard application we’re able to simply synchronize each of our nDisplay render nodes to the same revision number and launch in just a couple of clicks,” said Holland.

Every Second Counts On Set

Tom Ayre, Systems Administration at Dimension said, "One of the best features we find with Perforce is the ability to safely backup the server with almost zero downtime, which then allows us to rapidly create near exact replicas of our production servers within a virtual test environment. This gives us the capability to quickly test and ratify new features and workflows in an accurate mock production environment before pushing the changes to our production servers, so we can implement changes that we know will only benefit our users."

"Speed is a very important factor within virtual production, especially when the production is being filmed on a live set so being able to safely and securely verify any changes that are required for a production is fantastic, and Perforce Helix Core allows us to do this rapidly thanks to its robustness.” said Tom Ayre, Systems Administrator, Dimension.

Developing the Future of the Industry

Virtual production is only in its infancy. And studios like Dimension are changing as it grows. Geduldick wants his studio to, “Always ask the question, what's next? How do we push this further? I think that also helps us separate a little bit more because we're not just a traditional visual effects or production company.”

“I think you can say this about a lot of other studios that are at the forefront of virtual production. It’s about looking at servicing the creative and the story first. Technology helps us drive that.”

Keeping a pulse on what’s next also includes developing their own tech. Dimension uses internal projects to develop new technologies and new pipelines that can help clients today and tomorrow. “We look down the path and although this tool might not be ready today, it could potentially become a tool for creating what would solve X, Y, and Z problems for storytellers or even, for us,” said Geduldick.

“We’re excited about some major changes coming up with Unreal Engine 5 including the introduction of the one file per actor system which will change how our data is stored and make collaboration easier than ever before. We’ll also be keeping an eye on updates from Perforce including the release of Helix DAM for digital asset management,” says Holland.

Dimension also partners with other vendors to educate teams working in the virtual production space. Dimension, DNEG, Sky Studios, and UK creative partners have created a series of six mini-documentaries. These documentaries showcase the advantages and versatility of virtual production for capturing in-camera VFX and final pixel shots using an LED volume. Learn more about what Dimension is doing in their Virtual Production Innovation Series.

You can build like Dimension. To start, you need Perforce Helix Core.

Because when it comes to building big and immersive experiences, top studios trust Helix Core for source control. Try it free to unleash your imagination.