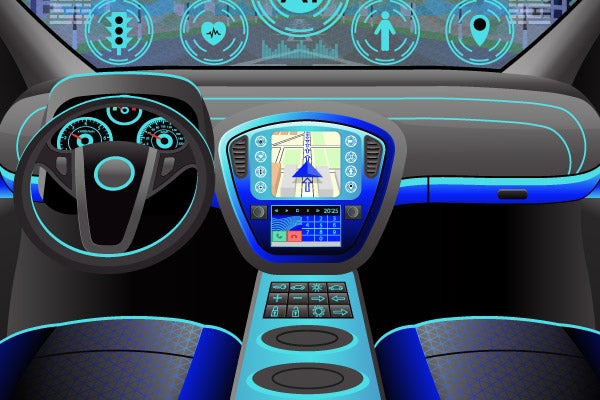 What Is an Infotainment System?

An infotainment system is an interactive system in a car that delivers information and entertainment, such as music, video, and navigation. It may also be referred to as in-vehicle infotainment or automotive infotainment.

An infotainment system is usually a screen, often a touch screen, typically located on the center dash. Newer infotainment systems may be located on other parts of the dashboard, such as behind the steering wheel, or may even appear as transparent images on the windshield (called a heads-up display).

What Can an Infotainment System Do?

The functionality of an infotainment system varies between models. It is usually the interface used to control music, and in relatively new models, it is used to connect (usually via USB or wirelessly) to mobile devices, control certain functions such as A/C, display the backup camera view and navigation, stream video, and more.

Infotainment systems generally refer to the systems that do not directly affect a vehicle’s operation—though there may be some overlap between them and Advanced Driver Assistance Systems (like adaptive cruise control or parking assistance).

The Future of Automotive Infotainment

Increasingly, infotainment is becoming a platform which integrates seamlessly with mobile devices and mobile apps through appropriate interfaces. An example is supporting Android Auto and Apple CarPlay and similar apps. This adds huge flexibility and means upgrades can typically be handled by upgrading the apps.

It won’t be long before advanced features like augmented reality maps hit the market.

You can shift ahead with the right tools.
Learn More

What’s Next for Automotive Infotainment Developers?

The rapid acceleration of the infotainment market means a couple of things for developers. They need to:

Developing infotainment systems that will succeed in an industry that is rapidly changing involves several challenges:

Proprietary design assets are extremely valuable, so it’s important to use tools and practices that keep them safe. Utilizing multifactor authentication (MFA) throughout development is one essential way to do this. Ensuring the right people have access only to the data they need is also important.

Infotainment development is only going to keep getting more complex. As teams handle more and larger files and juggle multiple projects, they can begin to slow down if they don’t have tools that can scale with them.

An infotainment dev team may have many employees, or employees living around the globe. Dev teams need systems in place that allow them to manage multiple contributions without compromising the product.

Infotainment Software — What You Need to Solve Challenges

One fundamental tool is version control, which ensures proper coordination and management of releases with teams of developers, potentially around the globe.  Yours should be designed around security, scalability, and speed.

Helix Core, industry-leading version control from Perforce, is built to handle some of the major challenges developers face. It allows teams to:

To remain competitive, automotive infotainment developers must ensure their most foundational tools are not slowing them down.