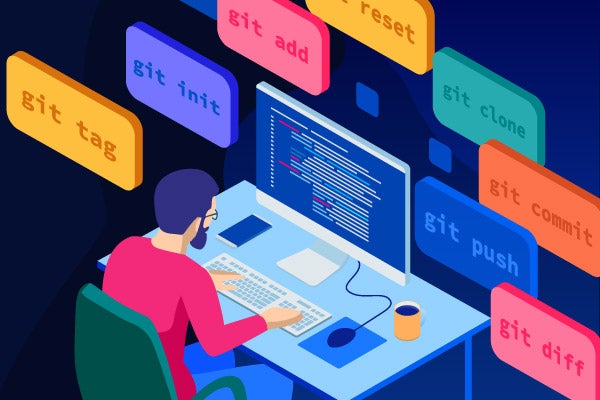 What are the most important Git commands? Find out in this blog. Plus, compare Git commands vs. Perforce commands.

Here are some of the most useful Git commands, plus examples.

You can use it to set your user name and email:

Executing this Git command creates an empty, new repository as a .git subdirectory in your current working directory. Once you create the repo, you can add and commit changes.

git clone is one of the most commonly used commands. It creates a copy of a remote Git repo on your local machine. It adds the remote location to the path to allow you to fetch, pull, and push changes.

Add new and modified files to your working directory. This Git command uses content in the tree, and prepares the files for your next commit.

The git commit command records changes in your repo’s version history. Think of a commit like a snapshot of your work. You can also use Git commit -a to commit any files you have added since the last commit.

Want to undo some recent changes? Walk back in time and use git reset to revert your working directory back to the your last commit.

Use this Git command to show the commits and details of a branch.

Stop tracking files and remove them from working directory.

Compare the status of files in the shared repo compared to your working directory. This Git command lists:

Find commits easier by assigning a handle to a commit using the git tag command.

You can use this command to switch between branches. When you check out a branch, the files in your working directory are updating to match the main version. All new commits are recorded on that branch.

Get started working with the git branch command. After you create a feature branch and commit changes, you can delete your feature branch using the same command.

Get a list of all branches in the repo:

Use git push to submit changes and modified local files to a remote or local repository.

You can also use it to push all branches your remote repo:

Or delete a branch:

Get the most recent version of your repo using the git pull command. It’s best to do it daily.

There’s another way to merge files. Using git rebase cleans up your commit to make all your changes a single commit. This streamlines your history.

Tuck away files and work on them later with git stash. You can also stash changesets.

Review the following Git commands most commonly used in any developers workflow. Check out how they compare to Helix Core commands.

We also have a Git cheat sheet to help you get started.

Get the SVN commands cheat sheet >>

If you have Git repos and teams using Git, you can still get the power of Perforce. Helix4Git + Helix TeamHub allows you to organize your repos into projects, secure your files, and leverage the Helix Core server for faster build and remote performance.

And if you have Mercurial or SVN repos, we support them too.

Check Out Our Git Solution

Learn more about how you can leverage Helix4Git and Helix TeamHub to improve Git performance.